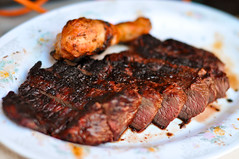 Amidst the sea of products and programs claiming to be quick ways to lose weight, there are two diet programs that come to the surface and has for a time had become all the rage in the weight loss scene: Atkins and Dukan diets, both formulated by doctors.

Making a big hit in France for the past ten years, this four-phase diet designed by French physician Pierre Dukan has gained even more popularity when it was launched in UK as it has been linked as the program that effectively gave Catherine Middleton the svelte figure for her royal wedding with Prince William. Even her mother was rumored to have adopted the French weight loss program. It is said to allow dedicated followers to lose weight rapidly and permanently, even if they continue to eat the foods they love. However, they must follow the schedule of foods to be eaten during each phase, such as eating only protein-rich foods on Thursdays.

The four phases that comprise the Dukan Diet are: attack, cruise, consolidation and stabilization. Rapid weight loss is expected during the first two phases, and the last two phases are intended to help maintain your new weight and prevent gaining back the weight that you have already shed.

This is a great diet for people who hate counting calories, as it focuses more on eating the right type of food rather than the right amount of calories. You have to strictly follow the rules pertaining to which foods to eat during the initial phases of the diet, focusing on high protein intake. If you are in these early phases, hang in there, because as the diet advances, the rules will let up. And pretty soon, you will be eating the foods that you love without worrying about gaining back weight.

The Atkins diet came some decades before the Dukan diet. Officially known as the Atkins Nutritional Approach, this four-phase diet was devised by American doctor Robert Atkins, who was overweight when he decided to create the program to solve his own weight problem. This low-carbohydrate diet encourages eating protein-rich foods, like eggs, meat and cheese, rather than the customary and basic carbo-laden foods like bread, pasta and vegetables.

Despite having been played down by health experts for years, the diet was recommended by two studies which were published in the Annals of Internal Medicine. They demonstrated that the protein- and fat-rich diet allows one to lose weight faster in the short-term as opposed to the mainstream low-fat diet. Although the diet may be effective in shedding off pounds, many health experts worried though that the diet may increase levels of bad cholesterol, making it unhealthy for the heart. However, the studies showed that the low-carb program appeared to enhance the blood fat profiles of the dieters. The study that involved a longer duration indicated that it is more difficult to keep sustain a low-carbohydrate diet after more than six months than with a low-fat regimen.

A nutrition expert recommended choosing the right kind of protein- and fat-laden foods: beans, chicken, nuts, fish, and monounsaturated and polyunsaturated fats, instead of fatty bacon and red meat to get the maximum health benefits of the Atkins diet.

Just like most of the quick ways to lose weight, the Atkins and Dukan diets both have advantages and disadvantages. It is best to consult a health practitioner to help you determine the best weight loss diet for your specific condition.

At AntiAgingWorld we advocate a low glycemic diet getting adequate amounts of protein, complex carbohdyrates and healthy fats.  This will keep insulin levels low and facilitate safe weight loss.

How to Lose Weight Fast

A Proven, Natural and Quick Way to Lose Weight