Bordered by Jordan to the east and Israel and Palestine to the west, the Dead Sea is one of the most notorious bodies of water in the world. Without a doubt, one of its most important characteristics is its high concentration of salt. However, it’s important to note that the salt that can be found in the Dead Sea is not regular salt by any means.

Rich in various minerals and other beneficial substances, Dead Sea salt has properties that no other type of salt in the world has. Furthermore, it can be used by people to obtain a series of benefits.

1. Dead Sea Salt Is Great for the Skin

To the delight of many, Dead Sea salt has been proven to improve skin hydration. As a result, the health, look and feel of the skin are greatly improved, reducing redness and roughness alike. These beneficial properties are caused by the magnesium that exists in high amounts within Dead Sea salt.

In order to enjoy this benefit, you only need to submerge your body in water treated with this salt. After only 15 minutes of submersion, the effects will be clearly visible. After bonding itself with the molecules of water, this element becomes able to penetrate the skin, subsequently improving its absorption and permeability.

Apart from the aforementioned magnesium, Dead Sea salt is incredibly rich in minerals such as zinc and bromide. When allowed to penetrate the skin, these substances act as anti-inflammatory agents. This makes this particular type of sea salt incredibly useful for helping reduce discomfort and pain throughout the entire body.

Another natural mineral that is contained in Dead Sea salt is fluoride. As is widely known, fluoride helps protect the teeth from acidic substances that can cause caries and cavities. In addition, due to its previously described anti-inflammatory properties, Dead Sea salt can help improve the condition of mouth sores, bleeding gums and ulcers.

Many people have the misconception that sea salt is a single, pure substance. The reality is that sea salt is made of various types of salts and small amounts of other substances. Some of the substances that comprise Dead Sea salt, albeit in small amounts, are sulfur salts. These salts have excellent antibacterial properties that can help cleanse and disinfect the skin. As a result, they are incredibly useful for treating conditions such as oily skin and acne. 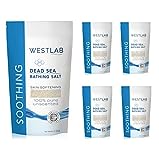 4. It Can Help You Exfoliate

Due to its unique texture and density, Dead Sea salt is an excellent exfoliator. If used correctly, it can help you get rid of the dead skin cells that, when accumulated, create skin roughness, clogged pores and blemishes. Simply combine a one-quarter cup of coconut oil with a one-half cup of finely ground Dead Sea salt.

5. It Helps Combat the Effects of Aging on Skin

Researchers that set out to evaluate the effects of Dead Sea salt on aging bodies found that it helps the skin regain elasticity. As a result, it can help smooth out both fine lines and deeper wrinkles. To reach this conclusion, scientists compared a commercial anti-wrinkle gel, a placebo and a 1% Dead Sea salt solution.

The result was outstanding. While the other two solutions only helped improve skin roughness by 27% and 10% respectively, Dead Sea salt solution improved the condition in 40%. In addition, Dead Sea salt can help improve the circulation throughout your entire body, which has a positive effect on the skin.

In recent years, Dead Sea salt has been widely used as a treatment for skin conditions such as psoriasis and atopic dermatitis. In the case of the former, it has been shown that bathing for 20 minutes in water treated with Dead Sea salt reduces sensitivity in proriasis patients by a mean percentage of 34.8 percent.

Lastly, Dead Sea salt can be used as part of a practice called climatotherapy. This practice has been proven to be able to greatly reduce symptoms associated with the condition such as dryness, redness, swelling and flaking. 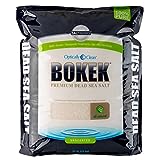 As its sufferers know perhaps too well, rheumatoid arthritis is a condition that produces a painful swelling of the joints. Over time, it may lead to bone erosion and deformity. Luckily, Dead Sea salt has proven to be an effective aid in the treatment of this debilitating condition.

Various studies have proven that patients who bathe in water treated with this type of salt every day for at least 20 minutes experience significant improvements in their rheumatoid arthritis. In fact, a majority of patients reported a partial or total recovery from symptoms such as morning stiffness. Others reported a marked improved in their 15-meter walk time, hand-grip strength, the number of active joints and the general activities of daily living.

Finally, Dead Sea salt has been proven effective in improving muscular conditions, including cramps, soreness and sensitivity. Consequently, this type of salt has been used to help treat fibromyalgia, a painful condition that has constant muscle soreness and fatigue as two of its most notorious symptoms.

Incredibly, salt that comes from the Dead Sea has also been shown to provide relief for other symptoms of fibromyalgia such as memory impairment, anxiety, headaches and sleep problems.

After going through this guide, the reasons why Dead Sea salt receives so much praise become very clear. In combination with other medicinal substances and specific treatments, it can help treat and even cure a myriad of conditions. Have you had any experience with Dead Sea salt? If so, let us know in the comments!