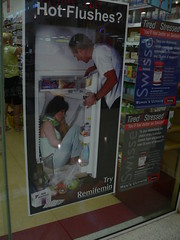 What is Hormone Replacement Therapy?

Hormone replacement therapy or HRT involves the supplementation of small doses of estrogen and progesterone, two female hormones that decline in amount as a woman ages, to address the menopausal syndrome.

HRT could make use of either hormones, or both. So there are HRTs that are estrogen only, or progesterone only, or estrogen plus progesterone. They could come as tablets, creams, skin patches, or implants.

Why is Hormone Replacement Therapy Needed?

The ovaries of a woman naturally produce estrogen and progesterone until menopause kicks in. These are the only organs in the human body that are set to cease to perform its function even while the body is still alive. Estrogen and progesterone play vital roles in the female reproductive system, and estrogen also perform other crucial roles in other parts of the body. When a woman reaches the age of 50, typically, her menstrual periods occur less frequently, until such time that they completely stop. Enter menopause or “the change of life.” A menopausal woman experiences a number of symptoms, such as hot flushes, sleep disturbances, vaginal dryness, although not all women go through these troublesome symptoms. Because of the drop in the levels of estrogen, menopause also puts a woman at higher risks for grave health problem, including heart disease, stroke, and bones loss which can trigger bone fractures and osteoporosis.

Hormone replacement therapy, which is one of the most prescribed treatments in the US, aims to address some or all of these concerns by replacing the hormones that have been depleted by the natural process of aging. It is shown to help in protecting women against osteoporosis as proven in major studies where menopausal women who took estrogen went through lesser incidence of bone fractures as opposed to women who did not.

The concept of HRT has been initiated in the mid-1960s and has demonstrated success in alleviating the symptoms of menopause and in cushioning against health risks associated with menopause. However, unease over its use has surfaced largely due to findings reported by the Women’s Health Initiative (WHI).   This study used non-bioidentical hormones (as opposed to bioidentical hormones that are used today), however, and did not address quality of life issues in its findings.  Many physicians that prescribe HRT believe the findings of the WHI were misrepresented unnecessarily scaring women of HRT. The decision to use of HRT should be done on a case to case basis with the woman being fully advised of the risks of HRT and the risks of not being on HRT.  If you think that its benefits far outweigh the risks, then go for it.

You have the last say of whether or not to take hormone replacement therapy, as this decision is an individual and personal one.

What is Hormone Replacement Therapy and What it Does

Replacement Hormone Therapy At A Glance

Androgen Replacement Therapy: Is It Right For You?